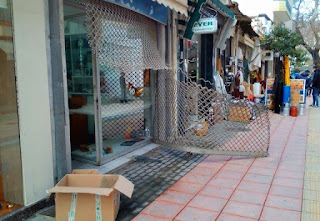 Tried to break into another jewelry store on the E. Tsaldari…
The 20,000 euros is estimated for the prey of Î¸ÏÎ±ÏƒÏÏ„Î±Ï„Ï‰Î½ burglar the morning of Wednesday, ripped out the protective roll security jewelry store, in the heart of Xanthi, and grabbed jewels and jewelry.
The identity of the perpetrators, so far, remains unknown, while at the same time there have been two burglary attempts, one in store on the road L. Army and the other in another jewelry store in the area of E. Tsaldari.
From the up to now information around the unprecedented this break-in it seems that the perpetrators were found shortly after 4.30 on the pedestrian Daglis and with a stolen I.X. car literally ripped out the roll of security of the jewelry store located directly across the street from the Officers ‘ Club.
Subsequently, and within fractions of seconds, they broke the glass door of the jewelry store and they removed all the jewelry were in the shop window, but enough of them were inside. Then fled to unknown direction. Their prey is around 20,000 euros, while for the incident was the Police, which carries out the inquiry.
The owners of the jewelry store even they can’t believe what has happened, since it is a store that is located just a few metres from the Central Square of the city, and in a particularly busy spot. It seems that it is the same perpetrators who attempted to open a jewelry store on the road E. Tsaldari, however, they have been detected and fled.
The investigations of the Authorities to identify and arrest the perpetrators are in progress.Source