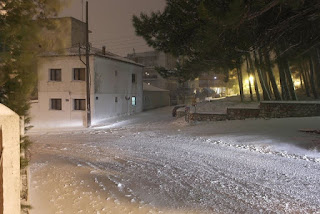 An Ambulance vehicle turned out of the road, left the road and ended up in the fields on Sunday, the Provincial Road Xanthi â€“ Abdera, a little outside the village of Î“ÎµÎ½Î¹ÏƒÎ­Î±Ï‚.
Under unknown up to the minute conditions the driver of the vehicle lost control and went off the road. Worth mentioning the fact that already by early Sunday morning in the area existed from severe weather, with snow falling non-stop and the indicator of temperature showed several times below zero, so in the morning and in the evening.
Fell old
In the morning of Monday, the picture across the County was significantly improved, since the snowfall stopped while the snow began to melt. The movement of vehicles is carried out normally, however, there is no shortage of places that present dangers for drivers and pedestrians.
Typical is the case of an elderly man who slipped on Monday morning in the Square of Freedom, causing him to fall and hit his head. At the point an Ambulance was called that transported him to the General Hospital of Xanthi.
Source