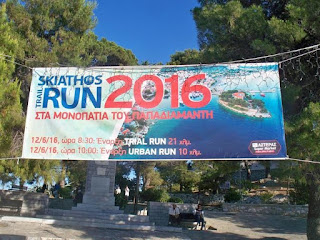 With international but also Greek holdings was completed with absolute success the …5th half marathon Mountain Run “In the paths of Papadiamantis”, that was held last Sunday, 12 June to Skiathos from the Municipality and the Skiathos Mountain Bikes, with the support of the Union of Hoteliers of the island.
In the race, with a route of 21 kilometers, was attended by athletes from several foreign countries, including the USA, South Africa, Germany, Sweden, Italy, England and from all over Greece, such as Lamia, Larissa, Volos, Kozani, Athens, Rethymno, greece, Karditsa, Kavala, greece, Skopelos, Alonissos, Salty.
In parallel with the Hilly half marathon took place and a road race of 10 km. the cobbled streets of the culture of Skiathos as well as a race of 600 meters for Primary school children and 1200 meters for high School kids.