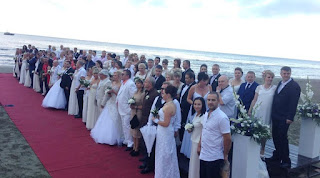 Sixty couples were married yesterday at the same time in Larnaca, next to the sea with a backdrop of the Medieval castle, the church of St. Lazarus and the…
muslim mosque. Their marriages, which were political, “bless” the deputy mayor of Larnaca, as the mayor is on trial for a case with bribes.
The couples were Israelis and Russians who could not marry in Israel due to legal complications concerning couples with different religion.
The oldest groom was 65 years old and the youngest bride 19. Couples with 150 guests arrived in Cyprus on a cruise ship from Haifa, Israel. From the port of Larnaca to the beach with them palm trees (Finikoudes) formed a procession of old cars and under the strict guard of police, which had taken steps both in the air and in the sea, since the Israelis are considered as a target high risk of terrorist attacks.
Everything went smoothly with the newlyweds to enjoy a host of small girls wearing traditional costumes of Cyprus and musicians.
After the ceremony, the Municipality of Larnaca gave it to me on brides from a clay decorated pomegranate a symbol of fertility and organised a reception with champagne and doughnuts. This is the 6th year that takes place mass wedding in Larnaca and it has now become a tourist institution.
Source