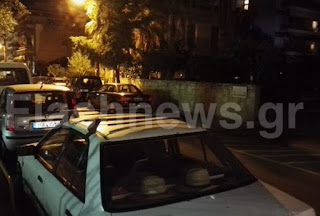 A burst of gunfire shook up the populous district of… a New Country – he was Arrested one person.
Great inconvenience was caused shortly after 21:00 in the evening, in the park, which is located on the road Meletios the image of god in the New Country, after repeated shots.
Fearful they were thrown out of their homes, the residents of the area, not knowing what happened.
The shots were fired from the top floor of a block of flats. Î‘Ï…Ï„Î®ÎºÎ¿Î¿Î¹ witnesses reported to the Flashnews.en he heard a woman screaming, “get out of here” to a man who probably threatened with voices that will commit suicide.
From the first time, strong police forces blocked the access to the area and a little after 21:30, they arrested a person who appears to be the perpetrator.
So far they have not made known the reasons which led the perpetrator in this particular act, however information indicate that this is a mentally weak person, which is expected to be driven in the psychiatric clinic of the hospital of Chania.
Even after the police arrived at the residence of the offender, they found him outside.He had locked the house and had wiped out the keys.The police made no attempt to get in from the roof of the building, however, the balcony door was locked.
Finally called a locksmith who opened the door and entered the house.In accordance with information anyone person I was inside while it is unknown if they found the gun of the offender.