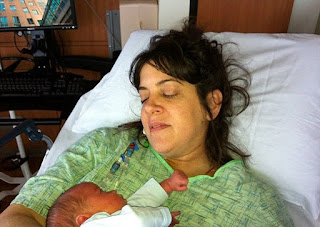 A shocking story brings to light….
the electronic version of the british Daily Mail. The 43-year-old today, Stephanie Arnold, who lives in Chicago, describes how he brought the world the second child two years ago and the rare complication during the birth.
The 41-year-old then wife, as he says, “he died for 37 seconds, the time of c-section and came back to life. He had amniotic fluid embolism, a very rare and often fatal complication of pregnancy in which amniotic fluid is poured into the bloodstream of the pregnant woman. According to the publication the Daily Mail, the doctors bring the woman to life like a miracle after 37 seconds.
Now, the 43-year-old claims that he had a hunch about what was going to happen. As he says, he had experienced six detailed visions that he was dying during childbirth during pregnancy. It was, in fact, so convinced he was that he was going to die in childbirth, so before she said goodbye to her husband and their daughter.
She said, speaking to the Daily Mail: “The reason I’m alive today and am able to speak is because the doctors were prepared”. The Arnold was 20 weeks pregnant when they told her that she had placenta previa – a condition that affects one in 200 pregnancies, and essentially makes the placenta to “clings” on the matrix. The same was surprised when they told her, as he had no complication during the first pregnancy and began to investigate. Read so that in accordance with the worst-case scenario this could cause a lot of bleeding. The Arnold he told the Daily Mail: “I Had an instinct that this was what was going to happen to me” and added that he had visions that he was going to die. The doctors advised that I had to give birth by caesarean section. “From that day, until I gave birth, I had detailed visions.
I was walking with my daughter in the park, and I figured the water falls and turns to blood,” he said. When he said that he felt that something wasn’t right with the pregnancy of the familiar of the thought that it was just the hormones, he says.
What saved her life as he says is that when she went to give birth in her file there was a note that there should be extra amount of blood for safety. “As soon as I gave birth to my son, seconds later I’m dead’,” he said. According to the Foundation for the amniotic fluid embolism, this complication is extremely rare and only affects one out of 40,000 births in North America. The amniotic fluid embolism can cause sudden cardiac arrest, major bleeding or the acute respiratory distress syndrome and multi-system organ failure. The mortality rates for infants still in the womb during such a situation is more than 65% according to the publication. In accordance with the same visions and the warnings she had been to the doctors to be ready for anything and this is partly due to that was saved. The Arnold spent the next six days in a coma. During this period, the doctors – and her husband – they had no idea if she’ll wake up with a fully functioning brain, due to the loss of oxygen, while the heart had stopped. But when the woman woke up, it seemed from the beginning that it was a pleasure. “When I came out of the coma the first thing I said was ‘Am I still pregnant?'” reports. Now the same is spreading the story for the awareness of more and more people for the specific situation.
Source