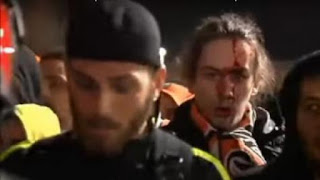 Reactions cause a video posted on social media showing clearly injured fans of APOEL…
while the police of the Basque country reportedly showed overzealous
Episodes, beatings and injuries were caused in Spain between approximately 1,500 fans of APOEL and the Police of the Basque country in Bilbao.
The greater part of the events unfolded after the end of the race in the “Like Midwives”, while the fans of APOEL to display Ï…Ï€ÎµÏÎ²Î¬Î»Î¿Î½Ï„Î± zeal by the local Police, especially during the phase of entry into the grandstand.
The videos below record the conflict of “Orange” with the Cops:Source