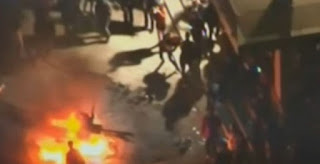 The administration…
the University of California at Berkeley, he was forced eventually to cancel the speech of the person in charge of the extreme right-wing online news page “Breibart News”, Milon Giannopoulos, after the demonstrations caused and the exclusion of the countries of the university.
This development, was notified via a post on Twitter, the protesters set up barricades, lit fires and threw firecrackers.
The head of strategy of the president, Donald Trump, Steve Bannon, was in charge of the referred page, while several of the protesters expressed their opposition, the presidency, Trump, according to CNN.