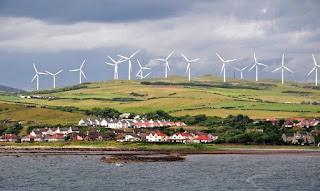 Scotland had set a target for the reduction of emissions in the country by 42% in 2020 with base year of 1990…
But, thanks to the rapid development of RES and especially offshore wind energy, Scotland exceeded that goal six years earlier with a decrease of 45,8% in 2014.
The secretary of Climate Change of the local government, Roseanna Cunningham pointed out that during the same period, in the rest of Britain’s emissions fell by just 33%. Part of the reduction of pollutant emissions, due of course to the energy poverty that has plagued Britain as well as many consumers do not open heating.
According to the representative of the organisation Stop Climate Chaos Scotland, Jim ÎÏ„Î­Î½ÏƒÎ±Î¼ emissions from the transport sector remain at the same levels as in 1990 and in the construction industry by 1%.
He argued that Scotland achieved earlier target of 2020 thanks to the warm winter, de-industrialization, the changes in the emission Trading System and specific policies.
Mark Î¡Î¬ÏƒÎºÎµÎ», a member of the Green group in the scottish parliament argued that the excess of the 2020 targets requires measures for energy efficiency of households and energy poverty.
As stated in the british Guardian, “the real challenge is not the reduction of numbers from year to year, but if the people of Scotland have the option to live in warm, energy-efficient homes and to move to a modern transport system. This requires funding and action on the part of the scottish government.
The Scottish government has set a target of reducing emissions by 80% by 2050, but many require even more ambitious targets.
â€”Explosion of renewable energy in Britain
“Green” was the one-in-four kilowatt-hours of electricity consumed in the Uk in 2015, according to data published by the department of Energy and Climate Change (Decc).
More specifically, there has been a record performance in the penetration of RES with 24,7% of the total power generation with an increase of 5,6% in comparison with 2014.
In Scotland only, the rate reached an impressive 57,7% at 2.9 terawatt-hour.
Wind farms produced 26% more energy electrifying 9.8 million. households in Britain. Photovoltaic increased their contribution by 86%, while the bio-energy by 28%.
Source