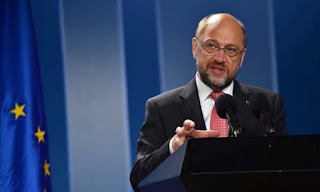 For instant start of the election campaign are pushing Chancellor Angela Merkel more and more strains…
the two christian parties, because of the good results of the SPD and of Martin Schulz in the latest polls.
So far, the results of polls are always most clearly when the respondents have to choose between Merkel and Schultz.
In yesterday’s poll of the institute of Civey, for the account of the magazine Der Spiegel, 44% of a representative sample indicates that he prefers the Martin Schultz for chancellor, compared with 38% who would like to remain in the office of the Merkel. At the same time 19% of respondents rejected both candidates, reports the Deutsche Welle.
In voting intention as to the parties, the polls are today, seven months before the elections on 24 September, close. Some see a tie social democrats and conservatives, some precedence of one or the other party. The fact of the matter is that the social democrats Martin Schulz are sagging in the polls in an upward trajectory and causing concern to the Conservatives, who are starting to react to nerve in the face of the high rates of social democrats. So, multiply the voices policies that require the Î†Î³ÎºÎµÎ»Î± Merkel to rally the electoral base of the conservatives.
The battle for the Agenda 2010
The rise of the social democrats is no longer a “firework”, notes the Bavarian Finance minister Marcus Center of the CSU. As he stresses “is not enough to say what we did well in the past”, but Merkel will have to mobilise the party base. In accordance with the Bavarian Ï‡ÏÎ¹ÏƒÏ„Î¹Î±Î½Î¿ÎºÎ¿Î¹Î½Ï‰Î½Î¹ÏƒÏ„Î® the challenge for the two christian parties in this election campaign is “the emotional charge”.
The immediate start of the election campaign by the christian democrats asks, for his part, the minister of Health and former secretary general of the christian democrat Herman Î“ÎºÏÎ­Ï‡Îµ. On the occasion of the statement by Martin Schulz for changes in the measures of “Agenda 2010”, the X. Î“ÎºÏÎ­Ï‡Îµ stresses the need to reveal the reality behind the left turn. Schultz. In Germany there is no social inequality, while a comparison with other countries shows that people here are “living really well”, notes the christian-democrat politician. As concludes the Example. Î“ÎºÏÎ­Ï‡Îµ “the defense of this successful model is the essence of the pre-election struggle”.
In accordance, however, with political analysts, the pressures and increasingly, democrats for a direct response are not only related to the increase in popularity of Martin Schulz, but also with the fact that the attacks against him didn’t yield any result. But in the last week the candidate for chancellor of the social democrats announced changes to the measures of “Agenda 2010”, the christian democrats believe that they have discovered a weak point.