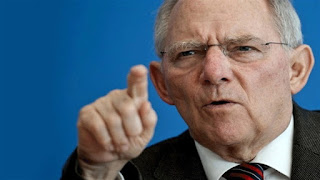 To adopt an approach of “intergovernmental cooperation” for troubleshooting, when they see the… the European Commission not to take the initiative urges the 27 member states of the European Union, the minister of Finance of Germany Wolfgang Schauble. Referring to the ÏƒÎµÎ½Î±ÏÎ¹Î¿Î»Î¿Î³Î¯Î± on the cancellation of a Brexit, he said that decision rests with the british government and the House of commons and demanded decisions as soon as possible.
The Association expressed the view, speaking to the newspaper Welt am Sonntag that the time required pragmatism, “if the Commission is not involved, you have to take things into our own hands and solve the problems (with cooperation) between governments,” he said.
“This intergovernmental approach has proved successful during the crisis of the Eurozone,” he continued.
Asked whether there should be reform of the european institutions, the Association replied that it would take a very long time as it would not be possible to change the european treaties quickly. He added that action must be taken urgently, and stressed “the usual schedules of Brussels is too long”.
“Soon you realize if the european Commission did not manage something or that we are bogged down in the (European) Council. And then governments have a responsibility”, noted the Association, explaining that he was really annoyed last year because Brussels was delayed so long to react to the crisis of refugees and migrants.
Asked if calls to remove powers from the European Commission, Schaeuble replied: “Not at all. I’m just saying that we need to be more pragmatic and to react faster”.
Wolfgang Schaeuble said he is in favour of further integration in the EU in general, but this is not the time for this because of the growing populism and euroscepticism.
Asked if it is necessary for Brussels to return powers to the member states, Schaeuble said that the urgent problems should be treated quickly to stop Europe is required to progresses to complex changes in conditions, which require unanimous approval.
Asked if Europe cannot forget the Treaty of Lisbon, which is essentially the Constitution of the EU, Schaeuble replied, “no, but in cases where there are doubts, greater emphasis should be placed on inter-governmental relations”.
Insisted that Europe needs to quickly prove that it is able to operate, and the EU to show how it can be resolves quickly problems-keys to regain the trust of the citizens.
The question is whether insisting in a statement he had made before the referendum in the United Kingdomâ€””means inside, and out means out”â€”the Schaeuble said he used this wording because of the had asked the British counterpart, George Osborne, to strengthen the campaign in favour of the stay and for you to think that Brexit would be irrevocable.
The negotiations between the EU and the Uk for the Brexit will not be easy, he predicted even the minister of Finance of Germany.
Source