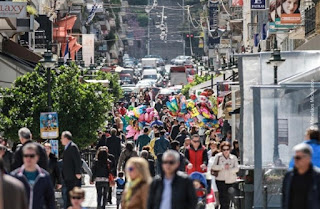 Increase of turnover, to a satisfactory level, they saw these days of the holiday, the merchants of Patras…
Purchasing traffic has increased with the citizens to give money and “back to life” -at least for the moment – the local market and economy.
The above has helped and the Sunday opening, as every year, the last two Sundays before Christmas and the new Year, i.e. on 20 and 27 December.
The commercial centre of the Achaian capital “flooded” by people in every age who came out for the last shopping and gifts of the holiday season, before the eve of Christmas and new Year.
The satisfaction of the purchasing movement of patras ‘ people expressed in the Patrastimes.en the president of the Commercial Association of Patras, George Î¡ÏŽÏÎ¿Ï‚.
“We are happy. Boosted the local economy in these difficult times and the economic crisis affecting the country and, in particular, the Achaean capital. The world went down to the market and picked up what he could, depending of course on its potential now,” said mr. Î¡ÏŽÏÎ¿Ï‚.
On what Sunday it was the best in terms of turnover, the president of the Traders replied that it was the previous one, namely that of December 20th.
We remind you that the above development gives you a shot in the arm to local dealers, who saw their revenues in the nadir, and many of them now, after and the tax storm and the unlimited burdensome financial measures, are threatened with eviction. Some of us don’t daily they didn’t do ÏƒÎµÏ†Ï„Î­!
Source