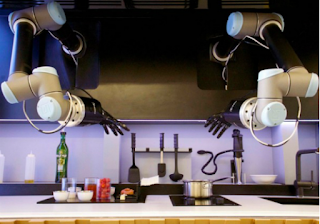 There are few times that the time you have is extremely limited and… you don’t have time even to eat, much less go in the kitchen to cook. In this case the solution is the delivery, but in a few years, the British are hoping that they’ll bring a robot master chef in your kitchen.
The Moley Robotics has created a concept kitchen prototype, which includes an oven, hob, touch screen, robotic arms and hands. The hands are equipped with touch sensors and can chop, stir, make use of the blender, to close and to open the oven.
The winner of the uk MasterChef, Tim Anderson recorded his skills in 3D and then these were converted into instructions for the robot, which can reproduce the movements of the.
This kitchen is operated either via touch screen or through a mobile application. At the moment the only thing that can make a particular soup. From 2018, which will be available in the kitchen, users will be able to choose from a library of over 2000 recipes from around the world.