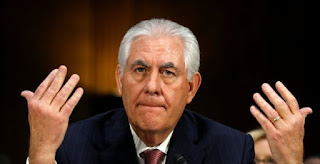 Rex Î¤Î¯Î»ÎµÏÏƒÎ¿Î½, proposed by the elected president of the united states Donald Trump for…
the position of the minister of Foreign affairs of the USA, ruled today that Russia represents a “risk” and that the allies of the USA within NATO, “have a right” to be concerned about the return on the international stage.
The former ceo of the oil group ExxonMobil, submission to the Foreign Affairs Committee of the Senate in the context of the hearing for the ratification of the appointment of the position of the head of american diplomacy, was a close associate of the president of Russia Vladimir Putin in which the president-elect of the united states Donald Trump is seeking rapprochement.
“Russia currently represents a risk. But it is not unpredictable. Invaded the Ukraine, occupying in particular the Crimea, and offered the support of the syrian forces that grossly violate the law of war,” said the Î¤Î¯Î»ÎµÏÏƒÎ¿Î½, in which raised, inter alia, questions about the relationships that developed with Russia at the time was ceo of ExxonMobil between 2006 and 31 December last year.
“Our allies in NATO have a right to be concerned about the rebound of Russia”, has recognized the Î¤Î¯Î»ÎµÏÏƒÎ¿Î½.
He admitted also that “as Russia tries to win respect on the international scene, the recent actions against american interests”.
The incoming minister for Foreign affairs not mentioned specifically in the cyber attacks perpetrated during the election campaign in the united states, which Washington blames Moscow.
The official confirmed before the Senate Committee that the U.S. probably will never be “friends” with Russia.
“Probably we’ll never be friends,” said the Î¤Î¯Î»ÎµÏÏƒÎ¿Î½, adding that the “systems of values” between Washington and Moscow is “clearly different”.
Rex Î¤Î¯Î»ÎµÏÏƒÎ¿Î½ said in addition that China “is not a reliable partner in order to use its influence to stop North Korea” and illegal nuclear and military programs.
The former ceo also considered that the objectives of the second largest power in the world are sometimes “in conflict with american interests”.
Even if the foreign policy of the elected president, Donald Trump has not been elucidated, clearly wants to rekindle relations with Moscow after the climate of tension with the government of Barack Obama and supports the adoption of a hard line with China, particularly in the commercial sector.