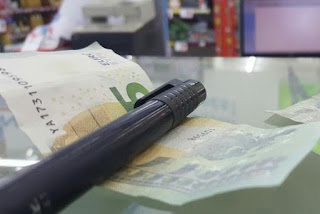 Once again, the free-riders do not stop to appear and try to sell on the market of counterfeit bills…
The phenomenon of trading with fake, has now become a daily, as reported by witnesses at tempo24.gr.
It’s not right the first time shop owners, and mini-markets or kiosks, without realising it.
In the last few days have been recorded, as report information of tempo24.gr, three cases of banknotes of 5 and 10 euro.
The Authorities, however, constitute special attention to the citizens and entrepreneurs by asking them to purchase a special machine recognition of authenticity.
At the same time, emphasize that we should not be in a hurry to trade.
How will you identify
The European Central Bank (ECB) announced, in accordance with the RES, that the second half of 2016 have been withdrawn from the circulation of about 353,000 counterfeit euro banknotes, i.e. there was a slight increase compared with the first half of 2016 and a reduction of 20,7% compared with the second half of 2015.
The number of counterfeits remains very low in comparison with the increasing number of genuine banknotes in circulation (up from 19 billion in the second half of 2016).
Genuine banknotes can be recognized thanks to the simple method of three controls (control by touch, visual inspection and examination under a corner”) that is described in the section on the website of the ECB for the euro, as well as on the websites of the national central banks of the Eurosystem.
If you suspect that you have received a counterfeit banknote, you should compare it directly with a banknote is genuine.
If your suspicions prove to be founded, you will need to notify the police, or â€“ in accordance with the regulations that apply at the national level â€“ the respective national central bank or your bank. The Eurosystem supports the law enforcement agencies in their fight against counterfeiting of the currency.
The â‚¬ 20 and â‚¬ 50 continued to be the most counterfeited banknotes. Compared with the first half of 2016, the proportion of counterfeits of â‚¬ 20 banknotes increased and the corresponding rate of â‚¬ 50 notes decreased. These two denominations together accounted for 80,3% of all counterfeits.
The new banknote of 50 euro, with innovative security features, will enter into circulation on 4 April 2017.
Konstantina Tsiamis
Source