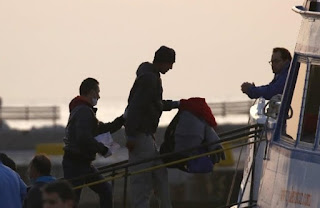 With business under the responsibility of the Hellenic Police and the assistance of staff of Frontex, in accordance with the provisions of the…
Joint Declaration by the European Union and Turkey, were returned today, 10 February 2017, in Turkey 19 irregular migrants â€“ all men. Specifically, the 8 are from Pakistan, 5 from Nigeria, 3 from Algeria, 2 from Bangladesh and one against the statement of the Palestinian, of which 15 refusals for asylum in the second degree, one with a negative decision for asylum in the first degree, two on the resignation of the asylum requests and one without the desire of granting status of international protection.
The return was by ferry boat chartered by the Service of a European border guard and coast Guard Frontex, which sailed from the port of Mytilene to a destination in the Î”Î¹ÎºÎµÎ»Î¯ of Turkey.
With the same ship, in accordance with the provisions of the bilateral Readmission Protocol between Greece and Turkey, returned an irregular migrant from Turkey, has expressed willingness to grant protection status.
In terms of the ÎµÏ€Î±Î½ÎµÎ¹ÏƒÎ´Î¿Ï‡Î­Ï‚ carried out in Turkey, the following legal framework:
(a) The bilateral Greek-Turkish Readmission Protocol, which was signed in Athens on 8 November 2001 and was ratified by the law.3030/2002 (GOVERNMENT GAZETTE A-163/15-07-2002).
(b) The Readmission Agreement the European Union and Turkey which was signed on 16 December 2013 in Ankara and entered into force on 1 October 2014 for the readmission of nationals of Turkey. From 1 June 2016 entered into force, and for third-country nationals, replacing the bilateral Greek-Turkish Readmission Protocol. However, during the current period, the Greek government is in negotiations with the Turkish authorities and is pending signature of Executive Protocol.
(c) The Joint Declaration.E.-Turkey of 18 March 2016, in accordance with which, as from 20 March 2016, all new entrants to the Greek islands of foreigners will be returned to Turkey.
It is noted that from 1 January 2016, have been returned to Turkey:
On the basis of the bilateral Readmission Protocol between Greece and Turkey, 1.196 foreign nationals of third countries,
On the basis of the Readmission Agreement E.E. â€“ Turkey, 57 foreign nationals of Turkey and
On the basis of the Joint Declaration.E.-Turkey, 889 foreigners of various nationalities.
(d) in Addition, from the date of implementation of the Joint Declaration E.E.-Turkey have returned to their countries of origin voluntarily through D.The.M., 596 foreign nationals of third countries who have entered our country by sea from Turkey.