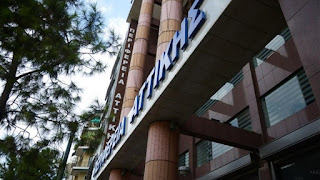 The project for the “Improvement and upgrading of the configuration of two playgrounds in the Municipality of Kessariani”, launched with the… signature of the relevant Program Contract, total cost 189.545,69 eur with VAT, the Governor of the Attica region, Rena Î”Î¿ÏÏÎ¿Ï… and the Mayor of Kessariani, Elias Î£Ï„Î±Î¼Î­Î»Î¿Ï‚. This is a project which is financed from own resources of the Region.
The purpose of the interventions, which will be made to existing playgrounds in the parks of the Municipality of Kessariani, is the upgrade as well as the compliance with the new specifications and security standards, in order to have the possibility of certification of suitability and granting of the required Licence.
The work will be carried out to the playground located inside the park, Shooting range, an area of approximately 1.000m2, as well as in the playground, within the park of 2 May, an area of approximately 1.100 m2. It should be noted that in both playgrounds, the institutions and the floors will be certified according to ELOT and will fulfil the safety requirements of the standards.
In particular, in the existing children’s playground in the park Shooting expected to perform tasks of configuration and consolidation of the soil, and interventions for the sub-base of the floor security of the institutions. Further, planned work, additional plantings, installation of wood fence, small extensions of the network Î±Ï…Ï„Î¿Ï€Î¿Ï„Î¯ÏƒÎ¼Î±Ï„Î¿Ï‚, replacement of light poles, maintenance work of existing living room and painting of concrete elements for a delimitation of the spaces of the game.
With regard to the existing children’s playground in the park 2 May set the work configuration of the ground and creation of six levels of parking game. Subsequently, the corridors movement, and the pavement of the entrance of the park will be developed in order to be suitable for use by people with DISABILITIES and prams. Among other things, will create channels for the drainage of rainwater, will replace the lighting columns, and there will be additional plantings.
Finally, it should be noted that the project will be tendered out and will be carried out by the Directorate of Technical Services of the Municipality of Kessariani.