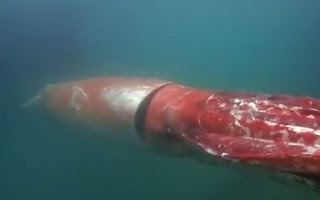 A rare, giant squid appeared in the waters of the japanese city of Toyama, on the day of Christmas…
The squid which belongs to the family of Î‘ÏÏ‡Î¹Ï„ÎµÏ…Î¸Î¹Î´ÏŽÎ½, has a length of 3.7 meters, according to Euronews, with some experts estimate that young age.
The huge mollusk was swimming for hours near the shore before returning to the depths of the ocean and was filmed by a diver, who claims that he managed to touch it.
The giant squid (genus Architeuthis) is a cephalopod of large and mainly found at great depths in the oceans.
Despite the large size, it is the large animals that have been observed less.