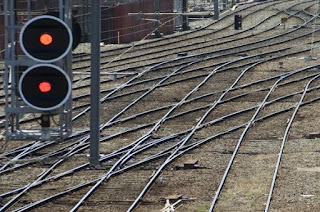 By the end of 2017 there will be electrification of the main corridor of the country Piraeus-Thessaloniki-Eidomeni…
Is completed in the next few weeks the project of reform of the electrification of the railway section Athens-Acharnes-Tithorea.
The completion of the projects will bring a small revolution in rail transport in the capital as well as for the first time in railway history, the Athens Central Railway Station will have electric propulsion and can reach up to there, the first electrically powered train.
This is the end of an arduous, long process that started in 2002 with the purpose of has been completed in 2005 (!!) but I had to ultimately spend another 11 years until we get to the point, the more central station in the country to be able to accommodate electric trains.
This is the convention “700”, which was launched in 2013 and had 2 phases. The first concerned the department of Acharnes-Tithorea and the reduction of electrification. In this section, although there was here and years of electrification but had been looted to a large part of it and it wasn’t working.
The second phase involved the installation of electrification in the section Athens-3 Bridges, which contained as an option in the above contract, was activated in 2015 and is now being completed.
The interest of course is focused on changing the Commuter routes of Athens as well as up to today, the absence of electrification in the central urban corridor Athens-SKA did not allow for the direct connection of Athens with electric trains.
This includes both the route to Kiato and to the Airport, where to go to/from Athens there had to be a transfer.
END OF 2016 IN PIRAEUS
The projects of electrification are continuing with the work-vacuum, which completes previous works in the department of Athens-Piraeus (contracting 751) and installing electrification-signalling-telecommanding.
According to the latest information of the ypodomes.com this project is to be completed with a small delay at the end of the year (instead of October).
With the completion of this work the electric-powered trains will be able to move throughout the length of the lines within the city and will be able to do reprogramming of the routes.
END 2017 Î—Î›Î•ÎšÎ¤Î¡ÎŸÎšÎ™ÎÎ—Î£Î— FROM PIRAEUS TILL THESSALONIKI-Î•Î™Î”ÎŸÎœÎ•ÎÎ—
The electromobility-related projects are ongoing and 2 projects. The first is in section Tithorea-Domokos (contract 635) length of 106km which are ongoing and expected to be completed in December 2017. With the completion of this project there will be electrification from the port of Piraeus to Thessaloniki, for the first time in the history of the Greek Railroad, by changing the data of the movements.
Finally, we have the recent start of the project-cleaner in the hallway Polykastro-Eidomeni, which includes electrification-signalling and is expected to be completed by the end of 2017. This project also considered important, as it will allow electric trains, freight and passenger to conduct international voyages between our country and the rest of Europe, which until today remains in the realm of fantasy.
Source