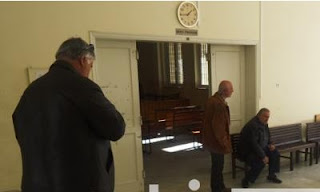 Kostas Zafiriou
An unprecedented incident in the annals of the Local Government marked the day before yesterday a meeting of the municipal council of the Municipality of Pinios…
Police officers appeared outside the meeting room and arrested a citizen, experienced executive of the Local Government, which at that time informed the Body!
Let’s see what exactly happened in Gastouni Friday night. At 20.30 in the evening began the meeting of the City Council with matters before the order of business.
The “raid” of the police
Just after 22.30.E. citizen and old new local authorities executive of the Municipality Pineios, would inform the House about some of the properties that have been built over the past decades in Glyfa and do not have â€“as he argues-all the statutory documents.
Everything was going smoothly when at 22.45, in the lobby, outside the meeting room make the appearance of four uniformed police officers. Because the separator chamber of the antechamber is with crystals, the police presence becomes immediately apparent and, of course, the Î±Ï…Ï„Î¿Î´Î¹Î¿Î¹ÎºÎ·Ï„Î¹ÎºÎ¿Î¯ they are surprised by the unexpected night visit. The cops think they’re looking for a particular person which suggests someone with a political.
Dialogue with the cops
The president of the Body mr. Shorty Peace interrupts the meeting and, together with the mayor mr Alexis ÎšÎ±ÏƒÏ„ÏÎ¹Î½ÏŒ headed to the lobby and ask the head to be informed the reason of the visit.
“We need to arrest the process of the act.E. for which it has filed a lawsuit, allegedly the cops say.
The president of the Body, and the mayor after they overcome the initial surprise, emphasize to officers that this area is the “temple of Democracy” must be respected by all, and that we should have been informed about the visit of the president of the Body or the mayor.
Of course, in the lobby left, and the councillors, who for the most part agreed with the position of the president and the mayor.
Of course, the presence of police is not prohibited in meetings of municipal councils, but when it comes to making arrest of a person (not a criminal) that is located in the chamber in session time, you will need to be updated badges first president of the Body and the mayor. Something like that happened, and this is understandably worried and angered them Î±Ï…Ï„Î¿Î´Î¹Î¿Î¹ÎºÎ·Ï„Î¹ÎºÎ¿ÏÏ‚, who initially thought that something is going on outside of the building and that are in danger from something or someone.
“I’ll make the arrest”
The police initially proceeded to the arrest and came out of the building, where they probably had contact, or with supervisor or with the district attorney.
The meeting of the board.P. of course it had stopped and after a few minutes returned to the police who informed the president of the Body and the mayor that we need to make the arrest because at some time you passed the committing.
Of course, no one could have delayed the arrest because if he was no longer in force till night court, prosecution authorities could blame the municipal authority for aiding and abetting.
At Vartholomio
THE K.P came down with the president, the mayor and aldermen of the building and the cops arrested him and the car led to A.T Vartholomio, where he was detained all night. There we found the mayor Alexis Kastrinos, councillors and presidents of Communities for support.
Support in Court
The Saturday afternoon that the arrested was taken to the courthouse Amaliados, where his lawyer, mr Sakis ÎšÏŒÏ„ÏƒÎ¹Ï†Î±Ï‚, asked for and got a postponement. The Court set trial.
The Court found for the support of the mayor of Pineios mr. Alexis Kastrinos, the deputy mayor, mr Cassian Claus, the president of a Legal Person Thanopoulos Panagiotis, the deputy mayor Apostolopoulos Antonis, the municipal Ball, Maria, alderman Angelos Bratis, the president of the Local Community Î¡Î¿Ï…Ï€Î±ÎºÎ¯Î¿Ï… Stavropoulos Athanasios, the president of the Local Community Lygia George Tsekouras. 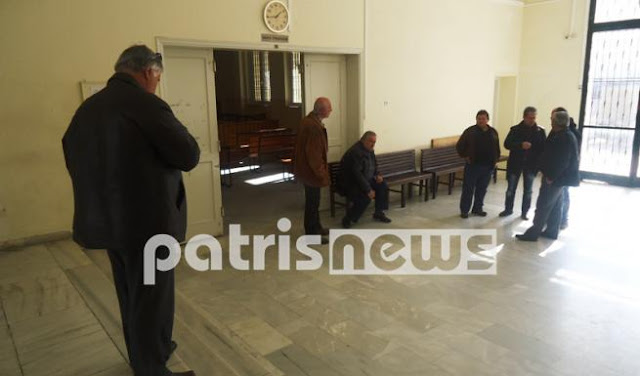