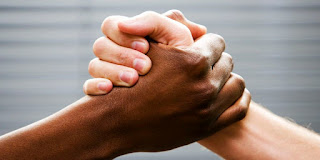 Evi Kokkalis, Psychologist M.Phil
And while the experience was positive, however he was cautious and very suspicious, due to the diversity of the other person’s…
What is racism and what mechanisms cause it?
According to surveys of Social Psychology, people tend to respond favorably to others who are members of their social group. This identity can be religious, political, social or racial. Often, the prejudices and discrimination against others, help people to improve their own self-esteem…they Feel powerful when they belong to a group.
To secure a â€œstable frameworkâ€ to develop stereotypes and prejudices against diversity, with suspicion, bias, and egocentrism. Any diversity, it seems â€œenemyâ€ that threatens them…In a society of moral relaxation, thrives on racism, that conceals a fear of the â€œforeignâ€ and â€œdifferentâ€.
But, when we are marginalising some people, due to diversity, they inevitably will create a kind of â€œghettoâ€ in order to protect themselves. As a result, sometimes progressing to acts of violence, crime, etc.e.Fear is a common denominator of the â€œopponentsâ€ and thus creating a vicious circle.
Not understood but, at a time to create wondrous achievements in humanity, that we can’t combat racism.The responsibility we all have, and not â€œthe othersâ€. Required to take with staff to fight everyone. To Î‘Î ÎŸÎ”Î•Î§Î˜ÎŸÎ¥ÎœÎ• diversity as a feature and not as a disadvantage.
To Î Î‘Î¡Î‘Î”Î•Î§Î˜ÎŸÎ¥ÎœÎ• that every human being is unique and important.To fight racism, you must first defeat him in us! The â€œenemyâ€ is foreign, heathen, different color, ugly, fat, crippled, idiot.But it is a MAN.
We belong to the same phylum, in the same â€œgroupâ€! Peace will win the war…The â€œspoilsâ€ of victory, is the acceptance and tolerance of the different, and if you conquer it, we must deliver to the new generation. Humanitarian education can be a bulwark to the spread of racism, and this depends first from family and then from school.
Parents well, with the main axis of the acceptance of the different, should open up new vistas to the children in empathy, humanism, personal maturity and democratic consciousness. I’m not a racist… and he’s not “black”. We’re both just PEOPLE.
Source