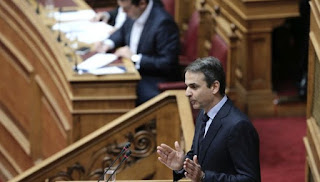 Timely question…
to the prime minister, with the theme of the increase of the phenomena of violence and glorification of crime, testified today, the president of New Democracy Kyriakos Mitsotakis.
Mr. Mitsotakis referred to the damage to vehicles and public buildings, the action of anarchists and armed attacks by offshoots of terrorism, pointing to the question of how the Area has evolved into the “holy of holies” for the Greek Police.
“From the time of the ascension of power by SYRIZA and the independent greeks, there is an increase of the phenomena of violence and glorification of crime”, stresses mr. Mitsotakis, noting that “in particular, the last period of time we monitor unacceptable: cars and public buildings set on fire, anarchists marching armed in the Exarchia district, citizens and officials of political parties are beaten up, police being armed attacks, and even with the use of martial weapons from offshoots of terrorism”.
According to the chairman of the SOUTHWEST “especially in the area of Exarchia, they have evolved into a quasi – “holy of holies” for the Greek Police”, while, as argued, depending on the phenomena we encounter in other areas of Attica, such as Zephyri, Acharnes, Aspropyrgos, “where are maintained outbreaks of absolute lawlessness, booming drug trade, increased theft and other criminal phenomena, for which the Police does not take orders intervention”.
The timely question, mr Mitsotakis asked the prime minister if she will continue to tolerate the para-state of Exarchia and if he has the will, but and plan, to cope with the growing and growing crime.