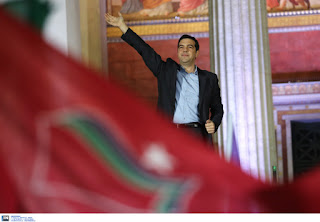 Alexis Tsipras may have spoken and the Congress of his party for elections at the end of four years, but foreign MEDIA, analysts and the Greek opposition waiting a bit… early…
New evaluation and discussion for the debt are the two issues of â€œthornsâ€ for the Maximus and so far nothing portends positive developments in any of the two. Working in accordance with the international resolutions will be a serious â€œcrash testâ€ for the parliamentary group of SYRIZA.
Characteristic is the example of El Pais, which, in reporting states that the government of Alexis Tsipras loses more and more popularity because of the discrepancy between election promises and governmental activities. The publication of the Spanish newspaper makes more reason for â€œfailureâ€ management of the refugee crisis on the part of the Greek government, and contains a reference to the competition of television licences and the reactions it has caused.
In the assessment that if there is no agreement in Athens and the lenders until December for the issue of debt, Alexis Tsipras may lead the country to elections proceeded and the Rahman Mujtaba analyst at the Eurasia Group, speaking to the Guardian. “The reforms in the labour, which is the main key to this evaluation, are ideologically a red line for many members of SYRIZA, which traditionally support the rights of workers and trade unions,” he said. “If you don’t indicate the possibility of agreement until December, it is likely that the government to pull the plug, to drop out of the second assessment and opted for early elections in the first half of 2017”
Unlikely featuring the return of Greece to the markets in 2017, Citigroup in a report, with the ÎµÏ€Î¯ÏƒÎ·Î¼Î±Î½ÏƒÎ·, however, that the collapse of the negotiations does not seem particularly likely. According to the same report, the â€œrisk of implementation of the programmeâ€ remain high, despite the progress made by Greece in the implementation of the 3rd Memorandum.
In favour of direct action at the polls has been fixed, the New Republic, with its representative, George ÎšÎ¿Ï…Î¼Î¿Ï…Ï„ÏƒÎ¬ÎºÎ¿ to assess in a statement on ERT, that â€œno one may exclude elections in the next period of time, 6 to 8 months, as mr. Tsipras with his speech heralded polarization and division and conflict with the lenders for the debt.â€
How Alexis Tsipras ‘will escape with elections in 2017, as the Karamanlis in 2009,â€ he said, and the president of DIMAR, and a member of the Democratic Î£Ï…Î¼Ï€Î±ÏÎ¬Ï„Î±Î¾Î·Ï‚, Thanasis Î˜ÎµÎ¿Ï‡Î±ÏÏŒÏ€Î¿Ï…Î»Î¿Ï‚, and the Odysseas Konstantinopoulos said â€œtwo options”â€. â€œOne is to make a heroic exit with elections using the assumption of debt or to keep a little bit still in power.â€