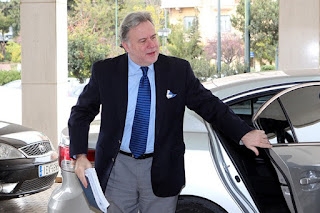 “I did my part, I am proud,” said the minister of Labour…
Proud of you for insurance reform, said Labour minister Giorgos Katrougalos, in an interview to the tv station SKAI, featuring a new system of law with equal rules for everyone. Mr Katrougalos said that it has achieved the big bet had, which was the formulation of a fair system.
In particular, the minister of Labour said: “it Was for me the big bet: How a obligation that comes to us from the memorandum and has all these bad things, such as the reduction of expenditure by 1%, the cut to the NCAA how could I to apply it, as it was in the memorandum? So, indeed, it would be the final blow to social security. I tried to incorporate it in a much more focused reform, which would cover something that is in need of the place for decades:
To rebuild the pension system, from the beginning, to protect the weakest and to have rules of equality. And, exactly, because I ran into this, and because basic principles of the left are equality and social justice, I believe that I did my part. And indeed, I’m proud of this reform”.
Referring to the abolition of the NCAA, mr Katrougalos noted that it would be tiered, pointing out that the NCAA was a welfare provision, a provision that is not accounted for in contributions and, indeed, had, after scrutiny of income. “We wanted the role carried out by the NCAA to play in the future of the national pension. The NCAA was not the best way to tackle poverty of older people, because of a random event that depends on the income, someone who had fewer contributions from someone else, could end up to receive a bigger pension, and now with the new system, the national pension will be the base for as long as it will take anyone to the future,” stressed the minister. As he said, “in 2018, will be given a large piece of what was lost from the NCAA, while stated that, then you will ÎµÏ€Î±Î½Ï…Ï€Î¿Î»Î¿Î³Î¹ÏƒÏ„Î¿ÏÎ½ all pensions.
At the same time, the minister of Labour reiterated that it will not decrease the main pensions, and added that there will be an update on the subsidiary, for less than 10% of pensioners.
Among other things, mr. Katrougalos stressed that he tried to improve the structure of the system and not only solve the financial problem, as did the previous government. “We’re not gonna do horizontal cuts, but the savings will come out of the structure, the architecture of the reform. We picked up the welfare benefits from the pension” stated the minister, adding that efforts have focused on how to share more fairly a smaller pension pie. “We have ensured that, whoever have an income below 1,000 euros, which today is, unfortunately, the great majority, they’ll take with our own law better pension than they would have taken,” commented mr. Katrougalos.
Source