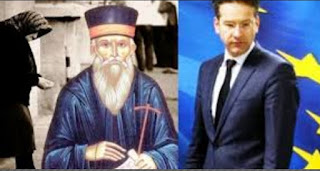 There were many people who it was predicted today..
The Ag. Kosmas aitolos, was one of those who were confirmed by the opinion of several. We present to you the authentic text of scripture, with the language and the grammar of the correct Greek.
“End of the fear syndromes of the Memorandum and the Loan Agreements, all of which are void and illegal, unconstitutional and inhumane!
200 years ago the Î•Î¸Î½Î±Ï€ÏŒÏƒÏ„Î¿Î»Î¿Ï‚ of the Genus, the Saint Kosmas aitolos who resurrected the Faith and the Homeland in the souls of Slaves, revealed to us by the Grace of God, that is NOT going to be paid for the overwhelming and largely
made and illegal Greek “debt”, the….which was created by throwing our money too, through the EEC/EU, which has altered the people, the values, the traditions and the very essence of it! Here are the specific prophecies of the Greek “Debt”:
a. “Will you throw in spite of; we ask you to take him back, but they will NOT be able”! (p.p. paras is money)
b. “It will impose large and unbearable tax, but will NOT catch up with it”!