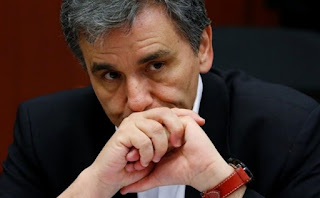 Without the disposal of reductions appeared the so-called Institutions in…
first time in a long time on athenian ground meeting with the Greek negotiating team, with the result that the critical tete-a-tete is rather short and inglorious end.
Although early on he had grown the feeling that the date for the budget will be a marathon, in order to diminish the differences between the two sides and to enter quickly water under the bridge, around 10 in the evening, the entire group of ministers walked out without the slightest declaration. Only official information was that it was just the agenda of the consultation, although from the outset it was clear that if not harnessed, and at the last second, the presence of foreign technocrats, the technical agreement may not be achieved within the expected timeframes.
Of the phones â€œlit upâ€ after the end of the first meeting was confirmed, first, that creditors, with the… good morning call for measures in the amount of 2% of GDP, that is 3,6 billion euros, thus contradicting the expectations of the Greek terms for â€œrelaxationâ€ of the requirements because of better fiscal and macroeconomic performance. â€œCan be reducedâ€ noted government sources, adding that in any case this number is not only about measures and countermeasures.
As for the… dosage, the lenders ask for, specifically, 1.8 billion euro from the reduction in the exemption system and 1.8 billion euros from the reduction of pensions, making it difficult still more the lives of the ministers who â€œrunâ€ the negotiation, which, moreover, would not have found the time. â€œIt’s optimistic these estimatesâ€ reported characteristics of european sources on the iefimerida, commenting on the statements by the government about the possibility of a technical agreement (staff level agreement) within the next 10 days, so that in the Eurogroup of 20 March to pursue a comprehensive agreement.
What complicates things is the â€œgapâ€ of 2018, as it can bring twists, commonly measures. According to government sources, has not yet been completed the technical discussion, but â€œis not expected to be a problemâ€, an assessment that clearly reinforces the concern about the requirements can be raised by the IMF. If the information converge to the fact that the lenders see this â€œgapâ€ in the about 500 million. Euro, the IMF has not been figured out yet, if this â€œgapâ€ is based on the forecast for a surplus of 1.5%, as reported in the last official Report for Greece, or for 3,5% of the European and the Athens.
If it were to prevail, the â€œhardâ€ line, then the negotiation is entering into uncharted waters. If again prevailed the view that we should not disturb the voltage recovery of the Greek economy, then the account will be smaller, but under conditions of politically managed, where the Fund request measures from the hard core of the State Budget.
George’s Grandfather
Source