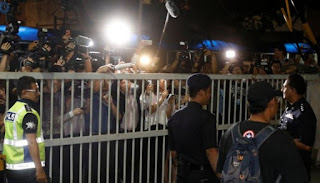 Possible is the delivery of the mortal remains of Kim Jong-Nam, half-brother of North Korean leader Kim Jong-Eun, his relatives in accordance with…
the competent Authorities in Malaysia. The delivery will be made through the embassy of North Korea, after the completion of the police and forensic investigations.
The Authorities have detained a second woman suspected of the murder, as she national agency Bernama today, citing the inspector general of police, while the official announcement is expected later in the day.
Yesterday, the malaysian police detaining a woman who brought vietnamese travel documents and announced that it is seeking a few more foreign suspects in the case of death, which several sources consider to be a political assassination.
The 45-year-old, who lived for years in self-imposed exile it seems that he was poisoned by two women, who escaped in a taxi. Some media have spoken of a poisoned needle, while the other for a liquid that was shot in the face of Kim Yong Nam.