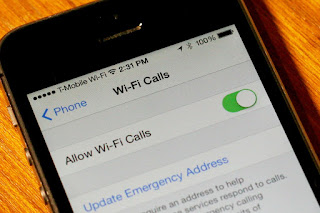 The opportunity to utilize the wireless access to the Internet to conduct telephone calls voice acquired by the holders of more expensive smartphones in the…
The united States, since the four largest, and many smaller ones, mobile phone networks provide the Wi-Fi Calling or Advanced Calling, but only when the signal is weak or non-existent.
Verizon was the last to be announced the “Advanced Calling” addressed to the holders of the best smartphone that has to offer the Samsung (Galaxy S6 and Galaxy S6 edge). It will follow the necessary software update that will send the network 2016 and the holders of Apple iPhone 6/6 Plus. The possibility of being introduced as the privilege of the holder of the most powerful smartphone, although the device isn’t able to distinguish if the signal is weak and should be made use of Wi-Fi.
The transition from the cellular network to the Wi-Fi network automatically, provided that the function is activated by the user and the smartphone has this feature.
The voice minutes for calls within the US are not charged or deducted from the prepaid time in the mobile network-international calls but are charged as such.
The Wi-Fi Calling is being introduced in the United States after the required exemption by the competent authority for telecommunications, as it relates to non-licensed frequency spectrum but does not meet the requirements of the FCC for the provision of telephone service to people with hearing or speech.
Although it is considered a that can fill a gap in services, wireless telephony, however, the reliability of voice calls via the Internet and wireless, it remains to be considered, since the Wi-Fi Calling is considered to be prone to problems of availability, when available wireless networks are in congestion, problems with continuous transition from one to the other, problems of loss of signal by walking out of range, or end, to interference.
Source