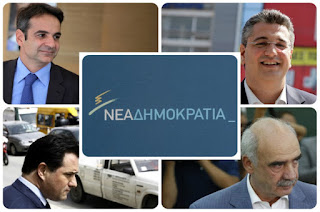 The agony and the determination of the electoral body for the… ÎµÏƒÏ‰ÎºÎ¿Î¼Î¼Î±Ï„Î¹ÎºÎ­Ï‚ elections in the SOUTHWEST, record the new poll of the company Interview made on behalf of Vergina Tv”.
According to a new nationwide survey conducted on a sample of 1000 people, is in the lead in voting intention for the candidate for the leadership of a SW Cr. Meimarakis, while “battle” between the candidates will be given for second place. Also, it remains open the possibility of a repeat of the electoral process in a second round.
In detail, in accordance with the recording of the intentions of public opinion ahead in the voting intention, the European Meimarakis with 36%, followed by Kyriakos Mitsotakis, with 24% , the Of Discover with 19% and Adonis Georgiadis (17%).
The question “who has tabled the proposal for the SOUTHWEST” highest , with a rate of 31% displayed the percentages of Vangelis Meimarakis , followed with 24%, Kyriakos Mitsotakis, and with 17% of the Apostolos Tzitzikostas and Adonis Georgiadis.
Indicative of the determination that appears to show the electorate , is the answer to a percentage of 87% that will vote Sunday, 20 December, while in 83% of the respondents reply that none of the candidates could not break the unity of the New Republic.