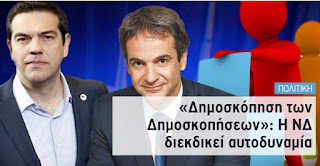 Analysis of five polls of the Alco, Kapa Research, Metron Analysis, ÎœRB and Î Î‘ÎœÎ‘Îš in January and February of 2017 published by the Daily kathimerini…
With a rate of 11.6% precedes today the SOUTHWEST of SYRIZA in the “poll of polls”, i.e. in electoral prediction resulting from the average of the estimates of the five major polling companies. In the table published on Sunday, the Daily also shows that the lead of SW is not only due to the collapse of SYRIZA, but also in its own rise.
Specifically, in accordance with the percentages of the “poll of polls” (the percentages are derived from the average assessment vote of five companies) the SW takes 29,9%, SYRIZA 18,3%, the HA 8%, the COMMUNIST party of 6.7%, DISY 6,5%, the CSR 2,9%, ANEL 2.5%, River 2%, the Tack of Freedom of 2.6%, the PEOPLE of 1,2% 5,5% vote for another party, while 13,9% of the electorate is undecided.
At the same time, from the sagging in the polls findings, it is apparent that the party of Kyriakos Mitsotakis claims with the claims of self-reliance whenever and if the elections, as well as enough to elicit the confidence of even the 1/3 of the undecided voters (4,6% 13,9% which will be added to the 29,9%).
It is noted that analysis of five polling companies Alco, Kapa Research, Metron Analysis, ÎœRB and Î Î‘ÎœÎ‘Îš in January and February of 2017, and a comparison with the polls of the same companies during the same period last year.