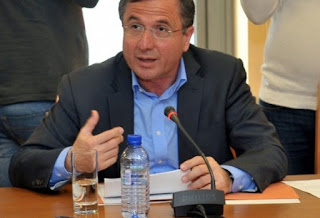 In a statement today, in the context of cutting the new year cake of Ecologists Paphos, mr. Perdikis stated that the year 2015 was a year in which tested and…
again the strength of our people and the impact of the economic crisis continued to torment our people with unemployment remaining at high levels and the economy is moving in the limits of the recession.
In conditions critical for the place, the social inequality to grow month by month, the scandals to succeed one another, and the crisis of the environment to continue, we have said, all have to step up the fight for the freedom of our country, to promote the ideas of green economy and to create a fair society.
“Unfortunately, in Cyprus, recent events have highlighted an unpleasant fact,” he continued, saying that â€œ even the most optimistic circles admit that the Turkish intransigence remains unchangeable, and therefore the crucial issues the differences remain irreconcilableâ€.
He also pointed out that “the Turkish obsession with the continuation of the guarantees of 60 , the permanent derogations and the guaranteed majority of property and population, etc., despite the concessions of the Greek cypriot leadership, leaving, unfortunately, a lot of room for optimism”.
Subsequently mr. Perdikis he wished as the new year lead us to a solution to the Cyprus problem, which is that the legitimate inhabitants of the island will live in peace and freedom and respect of all human rights for all citizens without racial discrimination and geographic separations.
He wished also like 2016 is the year of justice and punishment of the guilty for the major scandals of the economy and as the new year deal with unemployment and the social problems brought by the one-sided austerity and the memorandum of understanding, proceed with the necessary and useful reforms, and implement the vision for green growth with protection of the environment and nature.
The President of the Ecologists noted that we should not remain only in my wishes, noting that â€œ every citizen and especially we, the Environmentalists, as an organized group of citizens we have an obligation to contribute creative with positions, proposals and actions in the implementation of all these wishesâ€.
He even said, that to a large extent it is up to us to shape better conditions in 2016 for the games, and the visions of the people of cyprus”
“We won’t roll over well in the plans of the major parties for the disappearance of the voice of the Ecologists. Will not fail to Î»Î¹Ï€Î¿Ï„Î±ÎºÏ„Î®ÏƒÎ¿Ï…Î¼Îµ or to surrender to the manipulations of the parties of the establishment. Neither the change in the electoral law, nor the economic strangulation and the but dirty tricks will give us a breakâ€, on the contrary , the parties of the political establishment continued, â€œ you will find us in front of them, in that they don’t have any doubt,” added mr. Perdikis.
Referring, moreover, to the provision of the EAC power supply in the occupied on the night of new year’s Eve, mr. Perdikis said that it was not in a position to understand the basis of what logic arrangement is supplied electric power in the occupied territories without discussing even the debt of 2 billion Turkish Cypriots to the EAC.
The height of the debt of the Turkish Cypriots comes, he said, since free power supply in areas not controlled by the Republic of Cyprus from 1963 until today, as explained in the discussion of this issue in the House.
At the same meeting it was explained that it will take adjustments to the two electrical networks with security, the connection will be completed.
Mr. Perdikis stated that from yesterday’s news briefing was informed that adjustments will be required to take a foreign company, and subsequently questioned whether, again, â€œ will pay the wretched Cypriot taxpayer”.
Source