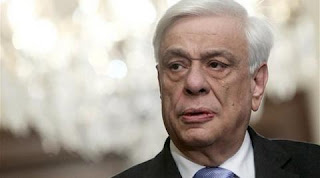 “We say to every direction, to all the neighbors, our partners, and even beyond our partners, the neighbors next door, over the… of the Aegean, here we are in these difficult times, to join, to share together the trials and problems, in order to build a peace, which is for the benefit of all states and all peoples. But it is clear that we, as a people, not only as Greek, but as a european, to defend those that international law recognizes, and in our country and in Europe”. This was stressed, among others, the President of the Republic, Prokopis Pavlopoulos, in his acceptance speech to the mayor of Kalamata, Panagiotis Nikas, during the official lunch for today’s feast of the patron saint, our lady of the Visitation.
Also, mr Pavlopoulos noted that “today’s celebration means that christianity teaches peace and love, which is another fundamental value of the European Union, and in particular the value of our people and of our homeland”. As he said, “we are people of peace, who never made wars of conquests, respecting the peace and sought in every way”. “But we are a people, who, through his story, when he had to defend the sacred values we did, do and will do,” he added. “Today’s celebration, however, means that christianity teaches peace and love, which is another fundamental value of the European Union. Mostly, though, the value of our people and of our country”, pointed out the President of the Republic”.
“But it is clear, that we as a people not only as Greek, but as a european, to defend those that international law recognizes, and in our country and in Europe”, stressed to be completed: “we must Not forget, that Greece, among other things, is the guardian and defender of the borders of the European Union. And this we will do. We therefore call on all to respect this sense of peace and international law, these hours, where the people have to live, to create and to cope with the crisis. We invite everyone to grasp these concepts, which our culture, our religion, highlight continuously. The ideals of solidarity and peace, those who will guide our steps and our path as the Greeks in perpetuity”.
Still, the President of the Republic stressed that “based on our heritage and we will defend that which belongs to us, not only with the concept of the nation and the people of Greece, but also in the sense of a nation and people, defending the european vision and the european ideal”.
Referring to today’s feast of the Presentation, he noted: “All inspired by the lessons of those, which exudes this great truly touches a celebration. Lessons, that, today in particular, are also of particular importance in today’s turbulent times”. “I want to stress once again and I say here in Wisconsin, but applies to the whole of Greece, but also for our european family, that this celebration reminds us of what the essence of christianity’, he said and added: “christianity is one of three major pillars of our european family. The european project was founded on in ancient Greece and the spirit of, the spirit of freedom and democracy, the spirit of creation in Rome, which gave us the concept of institutions and laws and, by extension, the rule of law”. “That teaches the meaning of love and solidarity, and we all know that Europe was built upon the concept of solidarity,” stressed mr Pavlopoulos.
“We will not cease to remind you that the first declaration of one of the founding fathers of the European Union, which is located in the preamble of all the founding treaties of the European Union, it is precisely the proclamation of the Schumann, which says that the basis of the European Union is solidarity,” said mr Pavlopoulos to complement: “it was Built the whole edifice, and there must be supported. If Europe loses this sense, then from there, I’ll lose the coherent link, which keeps her upright and leads her to march in the future, in order to erase its own historical role. Why Europe has a role, not only for the people but for the whole of humanity, since without Europe, there can be neither progress, nor peace”. As he said, “christianity is the one that reminds us, and in particular one such celebration, that we, the people of Europe to go and how we should carry out our obligations in full, and that we must be in solidarity to others.” “We, the Greeks, at this point, we have shown all these years and in very difficult moments we showed a great solidarity to everyone in Europe and not only. Prove it today in the big refugee issue, that we ourselves are the ones, where despite the huge sacrifices suffered by the Greek people, in the crisis, we are doing our duty towards the human, as it teaches the culture of us and international law,” stressed the President of the Republic, in Fact, at this point, said: “We and our other partners to let go of fear syndromes, to join in this direction, because this is the big test, is a test of the defence of human you need to get through this together.” Also, he noted that “solidarity is the rule of law for the European Union, are obligations which must be complied with, and from a legal point of view, and anyone who does not comply with these obligations, apart from the fact that it violates the principles of the european civilization, at the same time violates its obligations, and there are penalties for this, why can’t we respect the european acquis, institutional acquis, which is part of the european rule of law”.