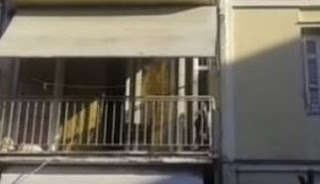 Noon on Tuesday will be played the last act of the drama, which… shocked not only the city of Patras, but throughout Greece, with the death of Nikola, by fire, in the projects Î™Ï„ÎµÏŽÎ½.
Relatives and friends of the family Lascaris, will say the last “goodbye” to the 8-year-old angel, at 12 noon of the Third, the Holy Temple of Agios Georgios Î™Ï„ÎµÏŽÎ½.
Tragic figures of his parents Stamoulis Laskaris and Amalia Papastergiou, the younger sister of Melina – Athena, as well as the grandparents.
The burial will be in the Î’Î”Î·Î¼Î¿Ï„Î¹ÎºÏŒ Cemetery of Patras.
However, many unanswered questions still remain questions about how caused the fire and why the 8-year-old boy with special needs was not able to react and be saved from the flames, the tragedy that occurred the other day, a little after 3: 00 in the afternoon, in the Projects Î™Ï„ÎµÏŽÎ½ in Patras, greece.
Light on the causes of death are expected to throw the forensic medical examination of the 8-year-old, who was deaf and dumb. This disability might cost him his life, as he was unable to scream when he realized the fire, so to hear him right away, but grandma and grandpa who were in other rooms of the house.
The unlucky 8-year-old, who was found sprawled next to his bed and brought burns, it seems was trapped by the fire and was unable to react, while his grandfather, who ran to him out of the room didn’t make it and was hospitalized with severe burns at the University Hospital in Rio.
The Investigation Department of the Fire brigade, which conducts investigations for the causes of the fire and exactly what happened, it is expected to provide an answer to the causes of the tragedy.
Source