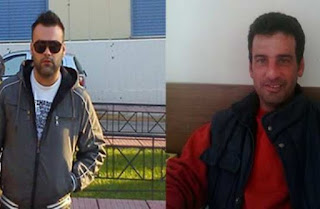 They shared the same job, the same route, last night was destined to share….
and death. A failure in one of the two trucks they were driving was fatal for the 34-year-old Antonis ÎœÎ±Î¾Î¿ÏÎ»Î¹Î± and the 42-year-old Dimitris Î Î¿Î»Ï…Î´ÎµÏÏŒÏ€Î¿Ï…Î»Î¿.
Tragic irony, one of them tried to help the other, and finally cut the thread of life, and the two instantly. While the trucks were stationary, under suspicious circumstances solved the handbrake of a vehicle and their truck collapsed on top of her.
The home of 42-year old in the Î¡Î¿ÏŠÏ„Î¹ÎºÎ± was plunged into mourning. Untold pain to his beloved Joy with which he had acquired the little Alexander. The funeral will be held at 6 this afternoon from the Sacred Temple Î‘Î³Î¯Ï…Î¿ Minas Poplar Patras, greece.
Antonis ÎœÎ±Î¾Î¿ÏÎ»Î¹Î±Ï‚ was born and grew up in Lily Achaia. The funeral will be today at 11 a.m. from the Church of the Dormition fleur-de-lis. Tragic figures in the house, his father George, his brothers Nikos and Eleni and his nephews.
Source