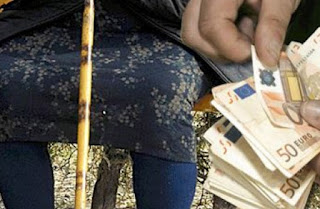 In the hands of the police was a young man, who attempted to cheat…
old and to get money, on the pretext of the “accident” related to the person.
According to information, the elderly woman complained about the incident to the police and during the transaction to the date booked to deliver the money, police men arrested the young man.
The police examined the involvement of, and in other cases of cheating,
In addition, the General Regional Police Directorate of Western Greece, in the framework of the prevention of the phenomenon of cheating people, the communication draws attention to the citizens, and asks in particular elderly people to be particularly wary when unknown people the phone and on the pretext of an emergency related – a friendly face (e.x. hospitalization or involvement in a traffic accident) are trying to convince them for the payment of a sum of money.
“At the same time, citizens must not give in to calls for a meeting (appointment etc.) with people them for money and must seek always to communicate the same, from their own telephone device, with the well-known-a relative, for confirmation of what they claim.
In any such case, the citizens are kindly requested to communicate directly with local Police Departments”, highlighted in the notice of the police.
Source