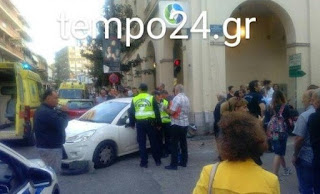 Two traffic at a distance of a few meters and with a difference of a few minutes occurred this afternoon in the…
Patras and specifically the avenue Gounaris.
Specifically, the first accident occurred around 5 this afternoon, according to eyewitnesses in the tempo24.gr, at the junction of the road with the Stage when one of the two drivers I.X. car has violated the red traffic light.
There was a clash of two I.X. while he was injured one driver.
Arrived ambulance AMBULANCE services at the spot and picked it up.
A few minutes later on the same road but at the junction with the street Î£Î¹ÏƒÎ¯Î½Î· two other vehicles crashed under unknown circumstances.
Source