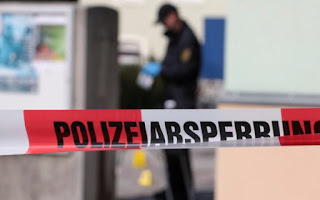 Passers-by shouted “jump” before a teen immigrant jump from the fifth floor of a residential complex in the city…
in eastern Germany, with the result that fatally injured, said last Saturday the mayor of the city.
The person responsible for the care of a group of young immigrants called the police Friday night in this building in Î£Î¼ÎµÎ»Î½ of Thuringia, saying that a 17-year-old Somalian had violent tendencies, police said. When the security forces arrived on the scene, they saw the young man sitting on the ledge of a window of the fifth floor.
“There is information that some passers-by were left enough time to attend the event, and it seems that they heard some shouting: “go on, jump”, said the mayor of the city, Sven Î£ÏÎ¬Î½Ï„Îµ.
“We can only condemn such a thing,” he added. “If anyone deal with this event like watching a movie and then thought that we must encourage, too, is an incredible act”, complained the Î£ÏÎ¬Î½Ï„Îµ.
Mathias ÎœÏ€Î­ÏÎ³ÎºÎ±Î¼Î±Î½, a local official of Thuringia, pointed out that some people taking pictures of the nearby balconies, as transmitted to the television station MDR.
The police report that was issued shortly before the statements by the Î£ÏÎ¬Î½Ï„Îµ does not refer to such prompts.
The MDR reported that the boy lived in the area since April, and had returned to the apartment where he lived in the Î£Î¼ÎµÎ»Î½ together with other immigrants early Friday, after it had been over a week, a patient in a psychiatric clinic. The television station reported that the 17-year-old Somalian was suffering from depression.
Source