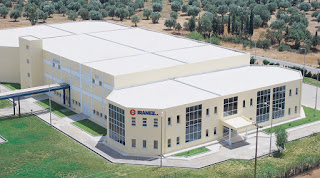 In the Industrial Area of Patras is located in the Factory D of the leading Greek pharmaceutical company vianex sa A.E, which was acquired by the Î™Î¦Î•Î¤ (Institute of Pharmaceutical Research and Technology) in 1999.
Factory D was launched, the exemplary operation as one of the most sophisticated and minimum in the european space production unit, cephalosporin products, in 2001.
The design principles of the Plant have as their objective the production of cephalosporin antibiotics in a separate and exclusive facilities, the safety of products, the protection of workers and the environment, as well as the implementation of the most modern standards of manufacturing (cGMP’ s).
The Factory is staffed by 47 people qualified staff with a high level of knowledge and experience.
The continuous and full compliance with the latest requirements of both the Greek Law (E.The.F.), as well as European and Global Agencies (WHO, FDA, EMA), has already been given in the unit of certification ISO 9001:2000 and has led many international Pharmaceutical Companies (MERCK, MYLAN, PHARMACHEMIE, etc.) to entrust in PARTICULAR the exclusive production of their products in the Factory D and export them to all over the world.
In the Factory are manufactured and packaged pharmaceutical products for both the Greek and the european market (France, Belgium, Germany, Spain, Holland etc.) and for countries such as Israel, Jordan, Vietnam, the Philippines, Australia, New. Africa. Recently the Factory started the production of products and for UNICEF.
It is worth noting that the PARTICULAR received an honorary distinction from the P.E.VI.AOC (Association of Resident Companies in the Industrial Area of Patras) at the beginning of 2015, for its extensive presence in the field of VI.IP and the ongoing support of the local economy.
Source