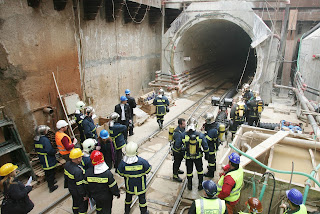 With tight deadlines it enters again in the orbit of implementation of the project of the basic line of the Metro of Thessaloniki, after the…
a recent agreement between the ministry and contractor. With a critical milestone in March 2017, so will be the clearance of the projects of the NSRF 2007-2013, all processes must run closely adhering to the timelines, because otherwise the risk of Î±Ï€Î­Î½Ï„Î±Î¾Î·Ï‚ of the project, and reimbursement of community funds amounting to hundreds of millions of euros is visible.
According to recent statements by the minister of infrastructure, Transport and Networks Christos Î£Ï€Î¯ÏÏ„Î¶Î·, informative event held in the auditorium of the technical chamber of greece/LVU, there has been agreement between department and contractor to resume the work that had been discontinued by December 2014. The agreement provides for three phases and function as May 2020, including the station Venizelos, as provided for by the applicable convention.
All requests of the contractor will be tried by the arbitral tribunals which will complete their work by the end of April. The decisions of the courts will be respected by both parties. With the adoption of the decisions, the contractor shall waive the application for dissolution of the contract of the project and the ATHENS METRO will waive the question lodged.
The money will ÎµÏ€Î¹Î´Î¹ÎºÎ±ÏƒÎ¸Î¿ÏÎ½ will be paid from the budget of the project.
Until March 2017, so will be the clearance of the projects of the NSRF 2007-2013, you will need to have completed the greater part of the civil engineering projects, i.e. the construction of the station, the accesses and tunnels, or you won’t be a next phase and the project will Î±Ï€ÎµÎ½Ï„Î±Ï‡Î¸ÎµÎ¯ .
If you pass the assessment, then the aim is to complete the a ‘ semester of 2020 and the position of the station in operation at the same time with the extension to Kalamaria .
What does it mean non-inclusion of the project in practice
What this will mean, but for the Greek state, if any, non-inclusion of the project of the Subway? From the C ‘ CSF project has been funded with 303 million. from the EU (and with 103 million. from national resources). Then, as a work of art-bridge of the NSRF 2007-2013, funded with 309 million. from the EU (and with 103 million. from national resources). The work he spent like a bridge and the PA 2014-2020, with 609 million. euros from the EU and 22 million. euro from national resources.
Of this 1.1 billion. euro, a large part -about 650 million. euro – represents low-interest loans from the European Investment Bank (Eib) and the rest, about 450 million. euro, are resources of the community support frameworks (CSFS). The funds that have been given by the CSF and the NSRF, in the case of Î±Ï€Î­Î½Ï„Î±Î¾Î·Ï‚, returned, and even with interest.
It follows from the above reasonably question why not been respected by the authority of the decisions of an arbitration court and stopped the project for 13 months to be manufactured, resulting in hundreds of workers to lose their jobs and be in danger of the project to Î±Ï€ÎµÎ½Ï„Î±Ï‡Î¸ÎµÎ¯. I knew the ATHENS METRO the consequences of the interruption of the work and the risk of Î±Ï€Î­Î½Ï„Î±Î¾Î·Ï‚ of the project?
By reaching the agreement the administration of the TCG/SCM feels right because from the first moment he had emphasized that the cancellation of the contract is a nightmare scenario for both the state which should return hundreds of millions of euros, and the city would be left with abandoned construction sites for an unknown period of time. In addition, the establishment of the arbitral tribunal was one of the proposals put forward by the TCG/SCM at a workshop in 2012. It also feels fully justified because it was recognized the necessity of the construction of the station, eleftherios Venizelos, and the coexistence of plant and antiquities.
The fact that the sword of damocles of the European Union for the successful completion of the project hanging over our heads, I certainly don’t have to make any of us proud. From the beginning of the project we had identified the problems and had proposed solutions imposed on us now from the outside. If we had heeded, it is certain that we would win time and many millions of euros.
The construction schedule of the project is tight and any obstacle created from here on out will have major consequences for the city and state. We all need to facilitate the rapid completion of the project, leaving aside motives and obsessions that plagued a decade.
*Mr. Ball is chairman of the technical chamber of Central Macedonia
Source