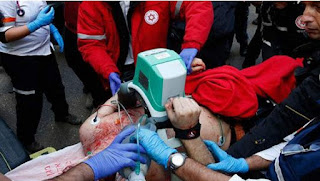 Carnage in a pub in Tel Aviv when a gunman opened fire and killed two people while injured at least 8 others…
The perpetrator, according to witnesses, he smiled before out of the backpack she was wearing a semi-automatic gun and scatter death in a crowded bar.
Witnesses report that the man appears to be around 25 and, as shown in the video from the security cameras, was wearing protective glasses and a windbreaker. Just before the deadly raid, he was given a tour in a nearby delicatessen
Despite the manhunt, he escaped and the israeli police stated that the motive of the attack remains unclear.
In accordance with information of the Daily Mail, one of the two victims, claimed to be the 26-year-old Else Bacall, one of the owners of the bars Simtra.
The Nattie Î£Î±ÎºÎ­Î½Ï„, other owner of the bar in the street ÎÏ„Î¯Î¶ÎµÎ½Î³ÎºÎ¿Ï†, where there has been the shooting, said the shooter “had fair skin and was holding a M-16. Wait on a bench outside before you pull out a machine gun from a bag and started shooting in every direction. It was a terrorist attack, without a doubt,” said the Î£Î±ÎºÎ­Î½Ï„ to the israeli television station Channel Two.
The police reported that has been unleashed manhunt for the identification of the offender in Tel Aviv.