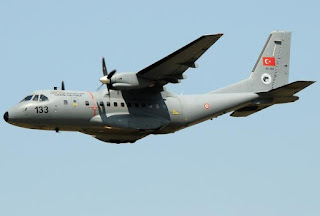 In the morning of 5 June 1967, 200 israeli fighter jets, a surprise attack, destroyed in the …
territory the biggest part of the Egyptian air Force and air defense of the country and essentially won the War of Six Days before this started.
Since then the strategic element of surprise is an issue that has been of considerable the armed forces of the entire planet. And the Greek.
However, until now it was considered very difficult to impossible to attempt something like this Turkey. However, the Ï…Ï€ÎµÏÏ€Ï„Î®ÏƒÎ· over to the island of Panagia, a Turkish aircraft collection of electronic information CN â€“ 235 at 03:39 on the 20th October and subsequently on 05:32, it shows that it’s likely that similar thoughts go through the minds of Turkish leaders.
This completely unusual time carried out the violations does not seem to have special meaning in the context of the strategic fragmentation which perform systematically the Anchor with regard to the limitation of Greek sovereignty in the Aegean. Shows that is to be a “symbolic” action, which is part of the Turkish high strategy.
On the contrary, may have been operational in nature and was intended to map gaps in the Greek air defense. To put it simply, you’re probably investigating if they can “get caught sleeping”.
The question is why would the Anchor be thinking of a similar energy strategic surprise? The answer to this may lie in the highly problematic position that has been found today in Turkey in general and Erdogan in particular.
In particular, the problems in the front with Syria and with the Kurds, and the precarious balance between the united states and Russia, “pushing” Erdogan to gain full control of the critical for international balances in the region of the Aegean sea as a counterweight to possible failure and geopolitical eclipse in the east of the country.
In addition, an unexpected “decisive” action over Greece would cause shock and awe to everyone, and will strengthen the image of Turkey as a dangerous force that must be respected and calculate all. Since at this moment Turkey is moving in a geopolitical minefield, having strained relations with the united states, with Egypt and with a number of other states, while maintaining a ÎµÏ€Î¹ÏƒÏ†Î±Î»Î­ÏƒÏ„Î±Ï„Î· cooperation with Russia, which at any moment can cease to exist and the relations of the two countries to return to a regime of acute competition, similar action can operate as a kind of paralytic weapon against enemies and “friends” and to provide the Anchor required a vital time for you to redesign its strategies.
However, the entrapment in a conflict with Greece could prove to be destructive for Turkey and the regime of Erdogan in particular, given the enormous contradictions that exist in the interior of the country in general and of the Turkish armed forces in particular.
Thus, a change of the status quo in the Aegean should be done in a flash, before you elicit these contradictions, and before they could react the other countries and especially the United States, that would consider this action as a direct attack on the coherence of NATO. In a similar case, the US would probably escape from the “forced” alliance with the Anchor and Ï‰Î¸Î¿ÏÏ„Î±Î½ in a clearly hostile relationship to her. By the way, neither Moscow would see with a good eye, for their own reasons, a Turkish attack on Greece, which would make the Turkey too strong.
So, the temptation of a snap of a strategic shock in the Aegean sea, which will bring accomplished within a few hours, probably is not so out of touch with reality as long as we insist to believe and it would be good to take precautions.
Source