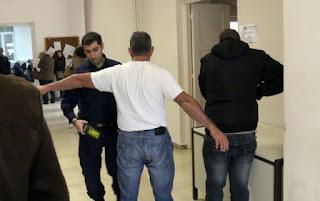 At first instance has been sentenced to a sentence of 13 years and released with conditions…
Released with conditions until the hearing of the case in the second instance one of the two convicted young for the death of 46Ï‡ÏÎ¿Î½Î¿Ï… fan of the National, Kostas Katsoulis. This is the 28-year-old, who at first instance was sentenced to a sentence of 13 years.
He had been found guilty by a majority for the category of lethal intended bodily harm at the expense of the 46Ï‡ÏÎ¿Î½Î¿Ï…. Even for the suspensive effect of the appeal there had been a minority of the registered office, there have been those opinions which considered that it had to be given.
The defense attorneys of the 28Ï‡ÏÎ¿Î½Î¿Ï… submitted today before the five-member court of Appeals Felonies Eastern Crete, a request to suspend execution of the sentence, which was accepted. The imposition of the terms of the prohibition of exit from the country and the occurrence of every month at the Police Department.
In prison for the death of Costas Katsoulis is still a 34-year-old, who has been convicted at first instance to a total sentence of 16 years.
Source