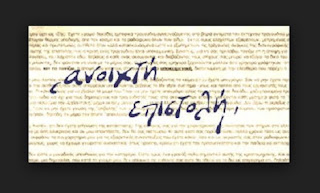 Mr President…
I would like to inform you that from 26 June 2015, where I found myself for the last time in the building of the D..P.Oh, I’m waiting to be called I, one of your members, and a third key person to testify in a case that has been nagging at me for the last 6 years.
Unfortunately, until now the only things that have to happen in February 2015 were:
1.- to get on 4 times in a row on the board.P.A because the lawyer in question each time was absent with imaginative excuses shipping assistant …
2.- to answer to the disciplinary board with a memo, and I don’t have any picture for further.
Unfortunately for you, and if you want to say that I would put it in class D.P.A. only in class is not but I would say that probably the customer relationship good keeps you as the mockery in there.
Who ever heard of the disciplinary coming, always in consultation with him when you can appear for to give a reason before him and to agree that everything is okay and always let them fool you by 4 times, and the disciplinary’t even in the mood to pull the ear ..
Now what kind of disciplinary is that I don’t know but I would liken it to a children’s playground and anyone who wants can have the pleasure of coming to tell us what happened.
It seems when I listened as a client of the bar association and the disciplinary has written there that it’s not working ink probably something like that he meant it.
You need to stop jerkin ‘ around in there some why when you ask for 80 euro for every time someone wants to terminate a lawyer for the 80 euro to respect and not to be played on the back of the theater of the absurd.
The envelope of such a lawyer is tan from complaints and you like D.P.A literally covering for him, and he continues the destructive work.
In my case reached up to the point of blatant coercion to get a signature so that the two complaints that I’ve done says that it is untrue.
Unfortunately on the 4 times he was scared to be found in front of the person who blackmailed him and got his signature.
The legal actions that will make the meet now , I just have the obligation to the public to tell you that this is the club that you say that it will clear and you will bring the meritocracy .
I ask the public to call the lawyer in question at the disciplinary hearing and give explanations only this and not the helpers.
I would ask the disciplinary more severity cases that are not just repeated from this lawyer, but closing of the eye, and hitting him on the back friendly give the right to continue, he and his assistant totally their work of destruction.
Cases that went well, I would say with a lot of leniency, he used it probably to work in his own personal interests while ignoring the situation of misery of the client .
Stop the cover from within the rotten system of disciplinary procedures .
Stop the pitch like a lawyer with values , when you don’t have the full picture of events .
Please at least stop talking about values and stuff like that when ordinary citizens , without legal knowledge, in complete disarray, the instruments that you monitor .
Please public now ,to be called and to give explanations for what he has done, at least to me, maybe a little later , with your help, to see any of the other victims of the and understand how disastrous is it the system that operates in the field of practice without real control .
Please public to stop this mockery.
To become indeed every lawyer, worthy servant of the ministry which holds for every simple citizen.
With assessment
Nikos ÎÏ„Î±Î»Î±ÏÎ®Ï‚