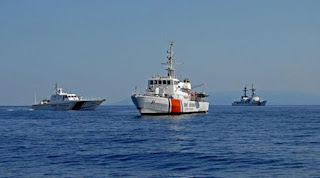 The non-release of eight Turks, officers, as, indeed, he admitted the advisor of Erdogan, Jmpraim Colleen…
is the reason that Turkey is escalating day-to-day challenges on the Aegean sea. And in this context, they sent three Î±ÎºÏ„Î±Î¹Ï‰ÏÎ¿ÏÏ‚ to “anchor” off the island of Panagia of Oinousses!
Like broadcasting the radio station “the Truth”, three Turkish Î±ÎºÏ„Î±Î¹Ï‰ÏÎ¿Î¯ were from noon on Wednesday (08.02.2017) “at anchor” within Greek territorial waters, at a distance of one mile from the isle of Panagia. On the spot, were two boats of the Coast and watched the movements of the Turks, who left from the point late in the evening.
And not only Ankara has sent ships to the area, at the same time, Turkish aircraft made flights over the island, in violation of the Greek airspace. In point are two boats of the Coast and monitor the movements of the Turkish ships.
It is noted that the island of Panagia is not islet. Here are the hosts for many years a military outpost and church, while many of the residents of Oinousses use it as pasture.