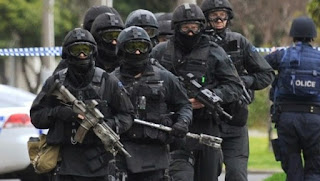 A 42-year-old was arrested by the Australian authorities as a suspected links with the Islamic ÎšÏÎ¬Ï„Î¹Î¿Ï‚…
The man was arrested in New South Wales on Tuesday, according to the Australian prime minister, Malcolm Î¤ÎµÏÎ½Î¼Ï€Î¿Ï…Î».
“According to the police, the man attempted to advise the Islamic State on issues of advanced technological weapons,” said Turnbull. There was however no immediate threat to the community.
The prime minister stated that the arrest was not linked to a planned attack in Australia. According to the head of the Federal Police, the arrested person is an Australian citizen and is believed to have acted alone. It is electronic in the profession and doesn’t seem to have direct experience with missile systems or laser technology. According to the BBC, research in the home can even last for days, “we will leave only when there’s no place that we don’t look” stressed the head of the police.