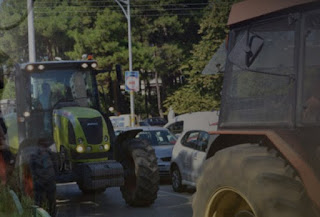 The battlements are the farmers of Crete…
while remaining on the roadblocks that have been erected up to now, in protest of the harsh measures of the Government, affecting the rural world.
The same day-to-day strengthen their struggle and oriented towards a large rally in Crete, but also the potential present in a nationwide rally in Athens.
A delegation of farmers from the roadblock, in Big Fields, participated in a nationwide meeting in Nice, the results of which will inform farmers and ranchers tomorrow, Wednesday at the roadblock.
Then it will be for another day symbolic blockade of the national road.
Also the day after tomorrow, Thursday, has planned a show of protest outside the building of the Directorate of Rural Development of Chania, in Agyia.
It is recalled that the day after tomorrow clubs and organizations of Heraklion carry out a rally in support of the farmers of the island at 7 p.m. in Lions.
Source