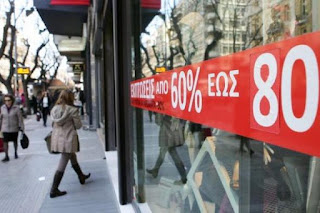 In the winter sales, which begin on 15 January,pin their hopes for recovery, the merchants of Thessaloniki Prefecture highlighting in the ana-MPA that, unfortunately, this year the turnover of the christmas market is lower their expectations, with the result that “the rift in their dues to deepen it”, as pointed out by the president of the Commercial Association (DAN), Pantelis Filippidis.
The president of the Commercial Association of Thessaloniki (DAN), Pantelis Filippidis, estimates that the winter sale will start with a rate of more than 50%, as well, as he noted, “traders seek at least to put in their pocket the amounts spent in order to buy the goods” and added that, in terms of their debts “unfortunately, we will not be met in full and thus will continue to accumulate”.
However, mr. Filippidis expressed his relief for the increased flow of visitors in the city of Thessaloniki from the Balkans and Turkey, noting features that they save for the holidays. “Can the Greek consumers to move to the city, but very few of them hold the bags,” said classified.
Reiterating that the purchasing power of Greek consumers has been reduced dramatically, the president of the DAN noted that negative market impacts and the fact that in the last days of each year, traditionally the shopkeepers are obliged to Ï€Î®ÏÏŽÎ½Î¿Ï…Î½ their obligations to the Irs.Secure data with regard to the movement in the market of Thessaloniki will be given in the upcoming period, and we will announce the results of an investigation of DAN.
It is recalled that the record decline in the christmas demand has been made in 2012, with the record low of -30%, compared with 2011, while in 2013 the decrease in retail trade had exceeded the -10%, nationwide, in accordance with the data of the Hellenic Confederation of Commerce and Entrepreneurship (ESEE).
With regard to the increased flow of visitors from neighbouring balkan countries, the president of the Union of Hoteliers in Chalkidiki, Grigoris Tasios, stated to ana-MPA that is the result of the work done in the last few years, with the aim to “strengthen” the road tourism in Northern Greece in general. He stressed, also, that the attendance of the favours of Halkidiki and the broader region of the Prefecture of Thessaloniki, with the result that the load factors on the properties recorded satisfactory, due to the competitive prices offered, compared to other european destinations.