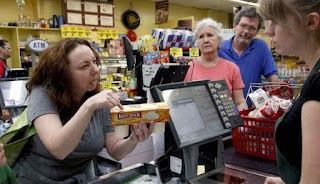 The blackmailer, the sexist and the woman who asked for change of a used d…
Those who have worked in the customer service, they know how annoying they can become customers, no matter how many smiles and “yes, sir”, I pronounce the member of staff. No matter what they do, there will always be some people who will want to take advantage of the few minutes of contact with the staff of a store in order to confirm their dominance on the hapless employees.
Editor of the british Vice, spoke with a few local shops in order to describe the worst experiences that they have lived with “inverted” customers…
Owen: “When I was working at a branch of Motor World, got a guy together with his three children. Bought a car battery, and he said, “how much do you want if I pay cash?” I replied that it was the same price regardless of payment method. Then, he made a signal to the children and they began to turn over the store while he kept repeating “how much you want if I pay with cash?” I took them to pull out of the hooks over 600 scented car and fly down windshield wiper blades before you finally give in”.
Beth: “In a large multinational technology company where I worked, a man came and she started bitching at me for the internet connection. When I explained to him that the company has nothing to do with the connection, he told me: “Okay, honey, how’ bout you go and find me a man to talk with him! I don’t seem to understand””.
James: “When I worked at the sex shop, Ann Summers, we had a woman who made a complaint about her vibrator broke and she wanted to replace him. When he pulled it out of the bag, it was dirty, covered with a white crust. My manager and he flipped out and refused to serve her if she doesn’t come back clean. The customer grew angry and knocked over a stand with dildos”.
Ben: “I Had a guy once, who raised the child over to the cashier and he told me to explain how I ruined Christmas. The child Ï€Î»Î¬Î½Ï„Î±Î¶Îµ crying… I was Working in a superstore and we couldn’t accept a gift card of 20 pounds”.
Tom: “once, when I was working in a call center, an elderly woman started yelling at me and stayed on the phone for five hours. When at some point I took a sigh, she said, “do you Think I’m not going anywhere? I’m 86 years old, I don’t have anything else to do in a day””.
Stephen: “I Worked in a supermarket Morrisons. One day, a middle-aged man in his quest to pass through the revolving doors, he dropped his pants. Then, he ran towards the restrooms in the shop and before we realized what had happened, he disappeared from the window. He left and left us with his pants down to the floor and smear his feces on the walls, the mirror… The director lured the cleaners with beer to clean up all this mess”.