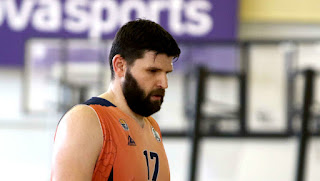 O guard of the Duke, Manolis Papamakarios, spoke to Sport Fm 94,6 and in the show “Counterstrike”, with the Claus Berge and Sava Î›Î¹Î²Î¬Î½Î¹Î¿, for…
-where was the derby Olympiakos-Panathinaikos at the CHEF: “And the two groups came from bad performances, but Olympiacos had played with Real. Both were wounded, but the “reds” showed how they overcame defeat and was stronger. It is one of the few times that the statistic is telling the truth. The Olympiacos players showed that they wanted it more, went to first on balls, and that was obvious from the offensive rebounds. The Knicks didn’t work the plan that was from the beginning, to hit the miss match. Lostfocus of the group and went the wrong way to claim the game”.
-how much did it cost the Knicks the absence of James: “The injury of James is very important, because it has been built with a different philosophy than in the past. Also, defense can offer much. I don’t excuse the absence, however, as significant as it is. Panathinaikos has focused a great deal on the limitation of Spanoulis, but he read it very well and capitalised on his teammates”.
-the performance of the ÎšÎ±Î»Î¬Î¸Î·: “The ÎšÎ±Î»Î¬Î¸Î·Ï‚ was never a kicker to put now 5-6 three-pointers in a game. Now seems to have lost his confidence, his opponents playing defense back and give it a shot and this creates a serious problem for the Knicks”.
-the performance of Birch and Yang: “In Greece we don’t have the patience. We should not expect our teams to play extremely early. The Birch is a kid who now plays for the first time in the Euroleague, the Yang comes from ten-month absence, and through the games you will overcome the fear. Time counts in favour of Olympiacos. The sample with the Real, it’s not for me representative, because the opponent had a lot of players with pace from the Olympics”.
-the importance of the guards in modern basketball: “basketball has been in the creation of the short and the tall mostly finished the phases over the rim. The part of the creation of the garde have the primary role. Olympiacos has the best guard of Europe, Spanoulis, and the roles are clear”.
-if Panathinaikos needs one or two guards: “the Intention is to support the ÎœÏ€Î¿Ï‡Ï‰ÏÎ¯Î´Î· this year. They know better. Definitely needs a guard with the features of the James, not to change the team philosophy which has been built. I’d take another player at guard”.
-the path of the Duke in A2: “We are still at the beginning, we have a very good team and a good roster. But it is a difficult league, a marathon, and go step-by-step”.