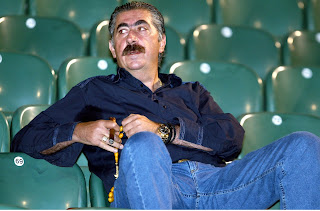 A crowd of people, friends and relatives bid farewell to the Makis Psomiadis…
Tragic figures of his wife, children of Stavros and Christina, son-in-law Giannis Bourousis and his brother.
The institute sequence is chanted in the Holy Temple of Saint John in New Philadelphia, and the funeral will be held at the cemetery of the Red Mill. Makis Psomiadis, the “Taverns”, the “Big Mac” or the “Snuggles”, passed away the morning of the Epiphany, betrayed by his heart. Found him lying on the floor of the house, the son of Stavros and immediately called an ambulance. It was however too late, since when they arrived at the hospital Hope, the doctors just found his death.
Present at his funeral and the ex-international basketball player Manolis Papamakarios. Wreaths have sent agents of the football as well as the AEK, which Makis Psomiadis was president from 2001 to 2004.
Source